There are a few online retail sites (won't say how many) where I have an "always open" shopping cart.  {There may be yarn / knitting sites involved.)  That way, any time I think of something I need (or, let's be serious, want) I pop it in the cart.  These posts are like that.  Whenever I think of something I want to say, I type it into my open blog entry.  So, here are some of those.

As someone who grew up around horses, I am embarrassed at having only recently found out that they and we are the only animals that sweat.  Everyone else deals with heat by panting.

Also, are we looking at that horse from in front or behind?

The other night I was sitting on the couch separating puzzle pieces and got the strong deja vu of being on the couch at my grandparents' house snapping beans or shelling peas.  Yes, I've been agricultural in my day.  I've even churned butter and slopped a pig or two.  Tending to chickens I never cared for.

Think about this: Ants can't lie.  If they did, their cultures would crumble.  "WHICH way to the food?"  "How do we get home?"  "This leaf is too heavy for me to carry alone." 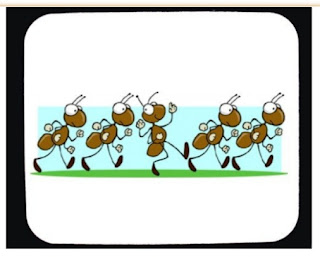 Did y'all have the game "Cootie" when you were little?  Fun times.

Did you know Jo-Ann Fabric sells jigsaw puzzles?  Since I've been looking for puzzles online, ads for all kinds of retailers are finding their way to me.  I know Michaels has puzzles, and since Michaels and Jo-Ann share corporate parentage, I shouldn't be surprised, but I am.

"Justified" is as terrific on a complete rewatch as it was originally.  It's one of the few television shows I've seen from beginning to end.  There is acting throughout that astounds me.

I've given entirely up on learning how to slice a mango.  Now, I peel the thing and eat it like an apple.  Yes, over the kitchen sink.

Hawks need to check their pride.  They are wonders, true, but we rarely see them.  When we do, they're perched all up high and it's hard to get a good picture of them, but this is a hawk, trust me. 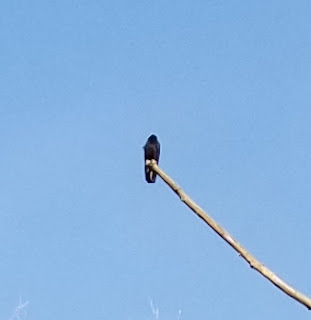 Blackberry bushes, in contrast, will just throw themselves out in front of you anywhere. 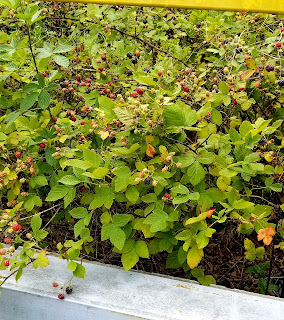 OK that horse video is kind of freaking me out. IS IT LOOKING AT US OR WALKING AWAY?

This is one of the books I am currently reading: It's where the plural of "octopus" post started.  But let me say right now, i... 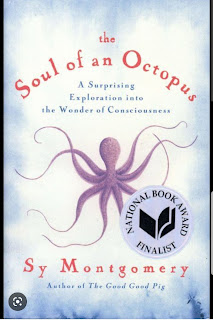